Author: Michel Leidson
Abstract:
Following the considerations of the performance management proposal PIP-4 we propose an improvement in monitoring for validator nodes.

Motivation:
One of the criteria to be a performant validator is to keep the node with a high uptime. The performance of the validator is based on checkpoint production and attestation on Heimdall and block production and attestation on Bor. Any reduction in execution in this respect degrades network health. In addition to not receiving the rewards, validators lose performance and gain a bad reputation. In the current state that node monitoring is in, we can only mitigate failures later.

Benefits:
Monitoring allows control to anticipate instabilities that occur in the node, where these failures directly impact the low performance of the validator. So, with this information in hand, you can correct it, reducing downtime and avoiding checkpoint missed.

Architecture:
Designed with Client-Server architecture, where the client application is located on the validator side, collecting the blocks in a log file and sending them to the server application, receiving the information and persisting the data to generate alert messages based on the signature performance of validators bor blocks.
​
Applications present in the system 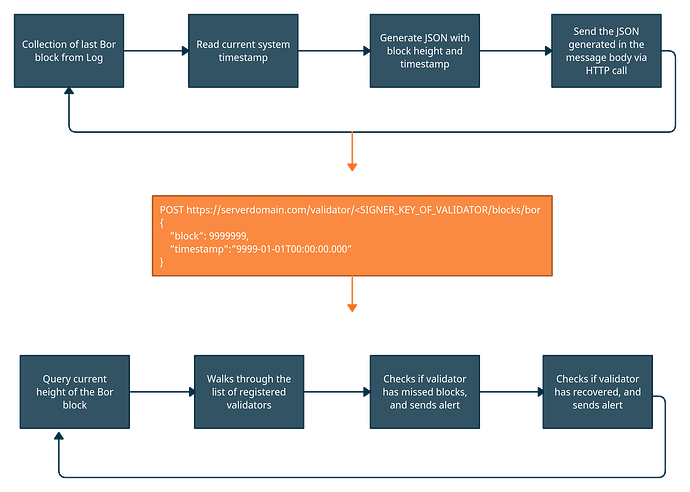 Monitoring should consist of two parts: the PoS node known as Heimdall and the EVM node called Bor. That said, for us to have Bor in full working order, the intervention of the validator side is necessary.

You can access the repository through the link:
GitHub - Michel-Leidson/collect-bor-blocks-client

The first step of the application is to read the configuration file where the API_URL, FILE_PATH and SIGNER_KEY variables are obtained, in the file located by default in /etc/cbbc/config. Right after reading the file, all variables necessary for execution are validated, and if any have not been defined, the error stating which environment variable is missing is criticized. After loading the variables, the script collects information regarding the height of the block, saving it in the BLOCK variable. Right after this collection, the block collection date and time is also saved through the “date” command in the TIMESTAMP variable. Once all the necessary information is collected, the “curl” is used to send, in the body of an HTTP request with the POST method, the JSON with the block information of the date and time of collection, as in the example below:

1 - Which notification channels will the monitoring of blocks be implemented?

2 - Are there risks for my validator?

There are no risks. Today the metrics are sent to a central instance using a subscription mechanism where the information collection takes place for the bor block.

Note: In a future version, if approved, the monitoring of bor blocks in real time will be implemented through: https://monitor.stakepool.dev.br/

Thanks for putting this together. Sounds good to us.

Great initiative, Michel, and thank you. Early detection systems are a must!

Monitoring has always been a key challenge for us to ensure uptime. Thanks for putting this together, Stakepool.
The Heimdall dashboard https://monitor.stakepool.dev.br/ and now this should help ensure much higher uptime.

Monitoring at the block level is very important, this is a helpful tool to help the validators in monitoring their node and improve their performance and the reliability of the network. Great job Stakepool.